On November 11th 2020 I have to undergo a cataract surgery in a hospital in Phnom Penh (Cambodia), a city where I’ve been leaving for almost 5 years.

Cataract is a well-known and widespread phenomenon from a certain age. The sight weakens progressively, somehow better in close sight and worst in far sight. Like a counter balance to the presbyopia effect. Better to take action.

No emergency for this surgery and the recovery is fast. Contrary to vitrectomy, the operation I had in order to treat a retina detachment on my left eye, which is severe, urgent and lasts a few long months. Four actually. I wrote an article about the one I had on April 8th 2020 and ended on August 4th. I encourage you to red it here An Hospital In Phnom Penh, An Eye Surgery

Bellow is the story, rather short, of this cataract surgery

On August 28th, at the end of my last meeting with my surgeon in order to conclude that my vitrectomy ended up well, he told me that I should think about having another surgery, about cataract, on my right eye. Damn, I thought I was over with eyes problems. “But no emergency he said, take your time and we’ll meet when you are ready”

I already had cataract surgery on my left eye in September 2016 in Paris, three weeks before I left for Cambodia. Everything went well and I have fond memories of it, especially the result: sight recovered, better than before, 10/10, no more progressive lenses, no need for glasses to see into the distance 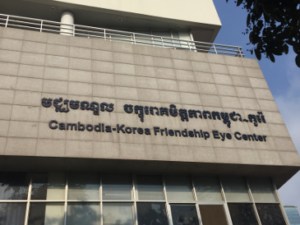 So I decide to make an appointment on November 2 to treat this right eye with the same ophthalmologist-surgeon, Doctor Un Leng in the same hospital, the Preah Ang Duong Cambodia-Korea Friendship Eye Center. Never change a winning team. Diagnosis is confirmed and we make an appointment for November 11 at 8 a.m.

This operation is called Phacoemulsification (using ultrasound) with implant of an Interaocular Lens (IOL). I chose the better one, while to go. In the operating room, we start with local anesthesia, a severe test because the syringe for the injection is scary. Then the operation lasts about ½ hour and is absolutely painless. At the end, the surgeon puts on a bandage and we return home without delay. 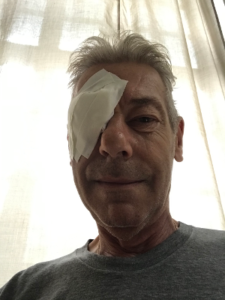 I return to the hospital the next morning to have the bandage removed. Eye check: The operation went well. Just a big boredom of eye drops 8 times a day and no washing my face with water for a month. Okay.

I see Dr Un Leng again on the 20th, i.e. nine days later. The operation was successful and all is well. The main point is that this right eye, even though it has always been weak since my early youth, has regained a significantly improved vision, less blurry and it complements the vision of the left eye. My vision from a distance is almost perfect, without glasses and, to read, I had new glasses made to fit my two “new” eyes at the very competent optician Mrs Theary who has a well-equipped stand at the Central Market (Psar Thmey) . 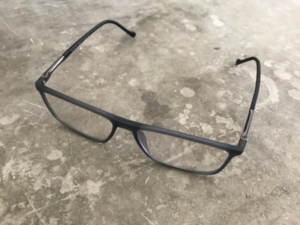 After twenty more days of eye drops 4 times a day, I have an appointment with my surgeon on December 10th. Examination of both eyes and the conclusion of Dr. Un Leng comes: “Mr. Poupard, you can resume a normal activity, wash your face with plenty of water. Both eyes are perfect, it’s the last time we see each other. Ah, one more thing: try not to smoke too much” he concludes with a smile that I guessed under his anti-covid mask.